In support of Noise Action Week (21st - 26th May), TCP Ltd (Taylor Construction Plant) is delighted to announce that contractors carrying out HS2 enabling works and utilities divisions in the south, have embraced hydrogen fuel cell technology as a green and virtually silent solution for off grid lighting. 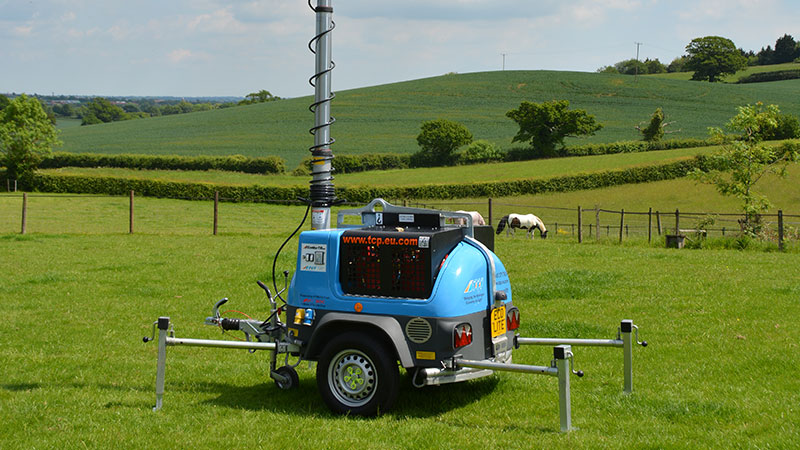 In support of Noise Action Week (21st - 26th May), TCP Ltd (Taylor Construction Plant) is delighted to announce that contractors carrying out HS2 enabling works and utilities divisions in the south, have embraced hydrogen fuel cell technology as a green and virtually silent solution for off grid lighting.

The Costain Skanska joint venture (CS JV) carrying out the HS2 enabling works and J. Murphy & Sons Limited who are carrying out utility diversion works, as part of developing the route of the High Speed 2 railway, are using TCP’s Ecolite LED Hydrogen Fuel Cell Light Towers. The lights, which provide a quieter alternative to noisy diesel generators, are being deployed for off-grid applications such as site security to help combat noise pollution in specific locations, such as residential areas

Several of the units are currently being used by the CS JV site team at Old Oak Common to provide lighting for the site welfare, site works and the walkway into the site. The products have been specified as a sustainable and economically viable solution to using traditional light towers. Murphy’s are also using the lights in a more rural area as a solution to environmental issues.

“Murphy’s Ecolites are being used in an environmentally sensitive site in Harefield, as part of utility diversion works,” explains Beth Dale, Site Manager from Murphy. “The lights help us reduce noise on our large site for the benefit of the wildlife and local residents. The risk of accidentally spilling fuel during re-fuelling is also removed for these lights, and reduces our reliance on diesel, contributing to a cleaner construction environment.”

TCP’s Ecolite LED Hydrogen Fuel Cell Light Tower has been specially designed to use HYMERA® from BOC, A Member of The Linde Group. This hydrogen fuel cell produces electricity from the reaction between hydrogen and atmospheric oxygen: the only emission is water vapour. The process is virtually silent, making it an ideal solution when complying with the section 61 noise pollution act. Simon Meades, TCP Ecolite’s Product Manager puts forward the reasons why the lights are more environmentally friendly than traditional light towers:

"The noise level from the hydrogen fuel cell light tower when it is in operation is no greater than rustling leaves. The system also operates within the mesopic range on the spectrum and therefore produces light similar to lunar light instead of replicating white light like many other mobile and task lighting solutions. In addition, putting light through the prismatic lens reduces harmful unwanted glare, further protecting the environment."

According to Noise Action Week, which is co-ordinated by Environmental Protection UK, noise is second only to air pollution in the damage it does to public health. Products like TCP’s Ecolite Hydrogen Fuel Cell Light Tower, which has been developed in partnership with BOC, make a huge difference to the construction industry in reducing pollution and conforming to environmental regulations.

The TCP Ecolite LED Hydrogen Fuel Cell Light Tower can be used in environmentally sensitive areas where all emissions are to be minimalised.

The BOC HYMERA® fuel cell produces energy by combining hydrogen with oxygen (from the atmosphere) to produce electricity – the only emission is water. There are no carbon or particulate emissions as would be the case with a conventional diesel-powered generator.

The process is virtually silent which is important for work at night, in built-up areas and enclosed spaces. The light tower is a proven solution when complying with the section 61 noise pollution act. The noise level no greater than rustling leaves or a library.

This is a ‘first’ for the integration of the BOC HYMERA® with the latest low energy LED Prismalence lamps. The LED’s operate in the middle of the colour temperature range 3500K – 5000K and within the mesopic range. The LED’s do not emit UV and therefore further reduces disturbance to wildlife including bats. The prismatic lens system ensures the lumens produced can be directed in a known light pattern in the area required which eliminates unwanted light spill pollution to surrounding areas.